SKU
HB-5APP
In stock
This is our classic Talking Skull with realistic mouth and eye movement!

Skip to the beginning of the images gallery
Looking for even more realistic movement? Check out our Talking Skull with Head Turn and the amazing Three Axis Skull!

Includes Skull with mouth and eye movement servo motors and PicoTalk controller inside the skull. All you need is an audio source (such as a CD player, MP3 player such as our BooTunes, microphone, etc) and speakers. The Talking Skull will react to whatever audio you send it, no programming required!

The skulls have an aged look as shown in the pictures.

Note! The Talking Skulls are designed for seasonal use. If running them for extended periods the servos that control the mouth and eyes will need to be periodically replaced.
Write Your Own Review
Customer Questions
I have a talking skull without head turn. Can I add head turn to my talking skull?

Sorry, no. The Talking Skulls without heard turn cannot be upgraded.

What size are the eyeballs?

Are there LED lights in the new zombie eyes for the talking skull? If so, what color are they?

Yes, they are "zombie white" and glow yellow when illuminated.

How weatherproof are these skulls?

They are not weatherproof and must be protected from all moisture and freezing.

Can the talking skull work with a latex or silicone mask over it?

Regular mask latex does not move enough and silicone is too heavy. Custom fabricated foam latex masks work well. We do not currently sell them as it is a very expensive and time consuming process.

Is the head turn automatic or controlled manually?

The head turns automatically based on an internal program. This program uses data such as audio waveform to determine when and where to move the head. The eye movement also works in a similar way.

Can I get a talking skull with out the eyes?

We do not have a Talking Skull without eyes.

If I wish to have a song as my sound, will the mouth just stay open/closed or will it pick up the words over the background music?

The Talking Skull “decodes” whatever audio it is sent. So if you send it music it will chatter like crazy = not good. You need to send it very clean, clear speaking audio. If you also want music you can play that from another audio device that has nothing to do with the Talking Skull. Or if you are skilled with such things you can create an audio track and have the talking on the left channel and music on the right inside the one audio file.

Does the Frankenstein talking skull come with led lights in the eyes?

Yes, all of the talking skulls come with LED eyes pre-installed at no extra charge.

Do the talking skulls led eyes come in green

They are only available in red.

Can the skull be programmed to say what I want it to?

There is no programming required. It will speak whatever audio you play into it.

Will the product operate from a battery?

No, must run from the supplied AC to DC power supply.

Can I buy just the skulls without the PicoTalk controller?

The Talking Skulls are only available as a complete unit with the PicoTalk controller. We do not sell them any other way and we do not offer talking skull "kits"

Will a battery powered PA amp with a wireless mic work with this product?

If you can use 2 skulls to talk to each other by using the left and right channels will 4 skulls talk to each using 4 channels?

Short answer - yes. A normal audio player (such as out BooTunes, a CD player, iPod, etc) has one stereo output. A stereo output has two channels (a left and a right). So to make two skulls talk to each other you use a spliter cable to split the left and right so each can go to one of the two skulls. Simple enough. To have 4 skulls talking at the same time you need to do the same thing to two audio players and have those players fire off at the exact same time. this is easiest using the BooTunes.

CNET How To : Set up an animated talking skull

Using a Talking Character with a Microphone 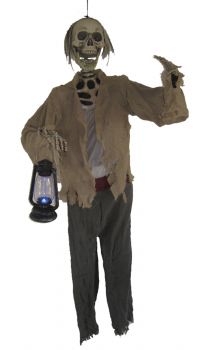 Skeleton 60in W Lightup Lanter
Be the first to review this product
$45.49 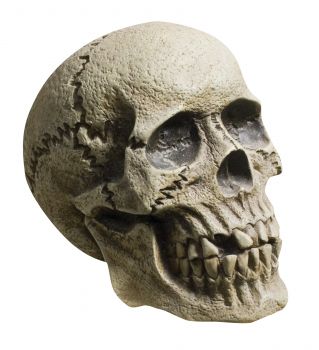 Rotting Skull
Be the first to review this product
$6.49

Skeleton Hanging 60in
Be the first to review this product
$48.99 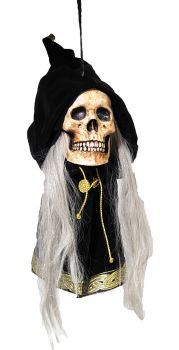 Grim Deluxe Hanging Skull
Be the first to review this product
$29.99 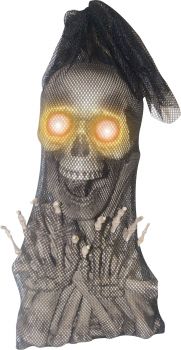 Bag Of Bones Light Up Eyes
Be the first to review this product
$18.99

Color Changing Skeleton Ghost
Be the first to review this product
$21.99